Saturday morning was the Extreme 5k. We did it with Robbie and Sienna. Not going to lie, it was a little more intense than I was expecting. It was a lot of fun though! We ran through tires, jumped hay bales, through a couple streams, through mudpits, over obstacles and finally through the “car wash.” It was a lot of fun, and we all had pretty good falls. Luckily not permanent damage, just a few blisters.

Thanks Robbie and Sienna for the fun time! (and for the pictures.) Next year Tough Mudder?
0

I’ve tried a few things this past week that have turned out amazing. First, broccoli quinoa casserole. It was super easy, and really tasty.

Preheat oven to 350 degrees and coat a 8×8 casserole dish – or individual ramekins – with vegetable cooking spray.
In a large bowl combine the soup, mayonnaise, milk, shredded cheese, Splenda, pepper, and nutmeg until well mixed. Stir in the quinoa and broccoli.
Spoon mixture into prepared casserole.  Sprinkle on a couple tablespoons Parmesan and bake for 30-35 minutes or until bubbly on the edges and golden.  Makes 8 generous 1/2-cup servings.

It was pretty tasty I will admit, and Nathan thinks it’s bomb. (bonus!) So I’ve been seeing peaches at the store and I always want to buy them all. I miss living next to the Walleys and getting to pick their peaches. I ended up buying a few, and when I cut it open, I almost past out from goodness to my nose senses. I love peaches! We also have mangos from bountiful basket. (I haven’t had too much experience with mangos, so they are kind of like an adventure) So we chopped those buddies up and tossed them in the blended with a little soy milk, agave, and ice and had ourselves a yummy dessert.


Also with some of the mangos, I made a mango crisp. Basically apple crisp..minus the apples, and add mango. It was pretty good, I think if I had some raspberries in it, it would have been even better. Maybe next time.

And lastly…(yes..more mangos) we made a mango salsa after church. I’ve never made salsa before, even though I come from the salsa making king. I would say it was a success. It’s not very pretty. In fact, may look familiar to when you’re sick. But it tastes really good. I won’t post a picture because…it literally looks like puke. Happy Sunday!
0

July 6th was Nikelles birthday. We went over to give her a gift I made her. I printed it off and put it in an 8×10 frame. There are a few details before you see…

1. Nikelle and Hunter met in Arizona at Jacob Lake. (where the heart is)
2. Hunter Green was Nikelles favorite color even before the real Hunter came along. But now it’s extra her favorite color.
3. Their story is pretty amazing.
4. I love Nikelle.

While we were over there, we met her new kitty Shakleton. He’s a dream…or is that a she? We don’t really know. Only a couple months old and super playful. I want a kitty so bad!
After we played with Shakleton for awhile, we decided to explore the used to be houses across the street. The school bought up a bunch of houses to tear down, and build apartment complexes. They looked like fun. And we ended up finding a treasure!
There were two dirty chairs just sitting there, calling my name. So we picked them up, and put them in the car. We didn’t realize how perfect they were until we got home. The wood matches our table so well! I’ll eventually recover the cushions. But they’re great for now! Yay for free chairs!
Saturday morning Nathan had a frisbee game. This game determined if they were in the championship or not. Well they won. 15-7. It was fast game, for which I’m grateful because it was already getting hot. This means, that they played again that night at 8pm at the stadium. The game was so much fun to watch! It was a long, hard game. They came back from from 9-14, to 13-14. The first one to 15 wins. There were some set backs, the stadium lights went off, two people blackout, and the other team called a lot of silly things.(they don’t have refs, they govern themselves) It was so much fun to watch, even though the other team won. I still think the Wolverines are undefeated….
Oh. They played on turf. Nathan is a mess.
0

By Alyson | Uncategorized | No Comments
Rexburg is legit. Sometimes I don’t realize this fact. Wednesday morning, we woke up and headed to main street. Jess and Bo had already staked out a spot, so we met up with them. The parade was so fun!   Some of our favorites were….a giant shopping cart, for our favorite grocery store Broulims.
Barack Obama and Mitt Romney fighting in the street. I don’t remember what it was for, but it was funny.
After the parade we went to Porter Park, which is where the parade ended, and there were booths set up selling stuff. We wanted an American lunch (at least a hotdog), but the only food we found was Chinese Food! And kettle corn. Kind of funny. Then we went up to campus, they were having a party. It was free to get in. They had a dunk tank, rockwall, balloon volleyball etc. And they had hotdogs. So after I dunked Nathan in the tank, we ate hotdogs. We were getting pretty toasty, and decided to head home. We fell asleep, and napped for 2 hours! After we woke up, we picked up Anne and headed to Idaho Falls with some of Nathans frisbee friends. They had a secret spot, not along the greenbelt where everyone and their dog is. We set up our blankets, the boys played frisbee and the girls talked, and played uno. We ended up driving over to the greenbelt to get something to eat. It was packed over there. We got dinner and ate over by the river. Then we grabbed a funnel cake and headed back to our spot.
Later we played the funnest game! It’s called Battle of the Sexes. Obviously the girls won, but more about the game. The guys are asked questions that would be more likely women would know the answer to. And the ladies are asked questions about guy stuff. It was a lot of fun, and we all got pretty competitive. When the sun went down, we got situated for the fireworks. We ate some kettle corn and just laid in the grass. The show was pretty awesome, and the people next to us had the radio station going that played the music that the show went to. When the finale started, we decided to get to our car and escape. (Last year, when Anne and I went, it took us almost 3 hours to get home. Normally the drive form Rexburg to Idaho Falls is about 30 minutes.) So we started on our way, and got stopped in traffic on the bridge, directly below the fireworks. It was amazing! We were lucky we left when we did. It was so fun to be so close to the fireworks. After the fireworks ended, traffic started moving again. We were home just after 11. Score!
I’m grateful for this country that we have to live in, and for the freedom that we sometimes don’t even realize that we have. Life is good, and giant part of that is the country that we live in. Add that to the gospel, and what more do you need?
0

I love our friends. We had a few of them over the other nights for games. We played would you rather and were laughing the whole time. Then while we were chatting, Bo pulls out his phone and says, “You guys gotta see this app.” It’s called Face Juggler. Oh. My. Goodness. It is hilarious. Basically, you take a picture with someone, and it swaps yours faces. See below. 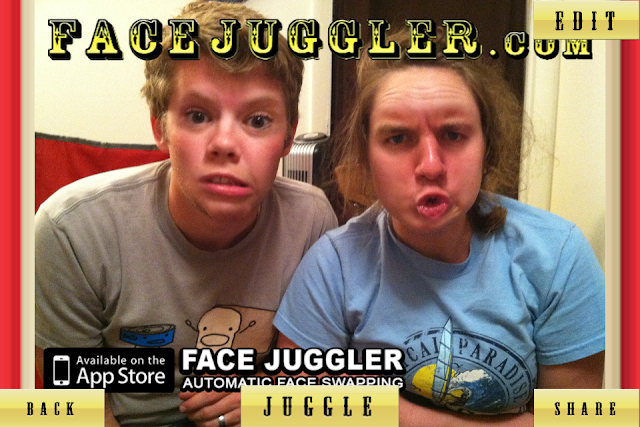 No this is not Justin Beiber and a troll. This is Nathan and Alyson with their faces juggled.

Saturday was a blast. We picked up bountiful basket, then went back to sleep. Nathan had a frisbee game at noon. It was terribly hot, was 2.5 hours long and a whiney girl was playing on the other team, so sadly, they are no longer undefeated. It was a very long, very hot, and really awesome game though. Nathan played like a boss. Then we were off to Driggs. I’ve heard that Driggs has an awesome 4th of July party. So we decided to head up to the Tetons. It took about an hour to get there, and we parked in a dusty, dusty lot. We walked up this path, then out onto a golf course. There were already tons of people with their chairs, and blankets spread out for the fireworks. We picked a spot, close to the path, and on a hill. Then we walked around the fairgrounds and had a good time. There was tons of fair food, blow up obstacle courses for kids, old cars, bmx trick guys and even a hypnotist. It was pretty hot, so we got snocones and watched the hypnotist. It was actually pretty funny.

Then Nathan spotted the bmx riders and skateboarders. They had some sweet ramps set up, and they did some crazy tricks. One of the bikers jumped over a guy sitting in a chair at the top of the ramp. INSANE! After that show was over, we wandered back through everything and got some waffle cut fries.

We then, grabbed some more water and headed back to our blanket. They had a cowboy do some crazy tricks on the main stage. Then a sweet cover band played. And since we were at Huntsman Springs. Jon Huntsman and his dad talked a little bit about the festival and how awesome it is to live in America. Especially Idaho. And it was weird…because..yes, it is pretty awesome that I live in Idaho. It’s been pretty good to me over the past 5 years. The sun went down and we watched the coolest firework show ever! It was super long and to music. Basically, just awesome. Even though it was a little cold, my allergies were kicking up, and my legs were itchy from the grass..it was good because I was with Nathan wrapped in a tiny purple blanket.

Right after the show we grabbed the blanket and ran for our car. We knew it was going to be madness getting out. We were basically the first ones to the parking lot. After trying to get into someone else’s car, searching in the completely wrong row, and loosing each other…we found Juan. (yes, our cars name is Juan) We hopped in, and realized we were completely covered in dust. We were also panting since we were sprinting all over the parking lot, looking for our stupid car. But we made it home safely and in pretty good time. Thanks Driggs for the fun day!