We celebrated by using my gift certificate to Polka Dot Pottery that I got for Christmas. Polka Dot Pottery is similar to Color Me Mine in Utah. They have unfired pottery, cups, plates, figurines, etc. Then you glaze it however you like, they fire it, and you pick it up a week later. I’m excited to pick them up! The pictures obviously aren’t fired, they will be brighter and shinier once they’re fired.

After that, we went to PF Changs (another gift card) for their half off appetizers. I was surprised we were basically able to walk in around 5:40 on a Friday, during happy hour. We went a little crazy.
Like…ordered 6 appetizers crazy. We got veggie lettuce wraps, wontons, crispy green beans, dynamite shrimp, ahi tartare and a California roll. Um, holy food. I even got a ginger beer, which was really interesting. You couldn’t drink a lot at a time because it was really ginger-y. But I really liked it! We should have taken a picture of our tiny table with all our food. It was all delicious and the leftovers were even good today! I was surprised.

After dinner, we had Nathan’s parents come over for cake. I’m surprised that we had room, but you HAVE to have cake on a birthday right? Nathan made me a white chocolate raspberry bundt cake. It was super moist and delicious. I found the recipe here.  *You’re not allowed to think about the caloric value while eating it.* Birthdays are once a year.

I opened presents from my mom and in-laws. An awesome lime squeezer, it’s life changing, really. Also homemade laundry soap and q-tips, also essential. I had opened my gift from Nathan as soon as I woke up. One yoga class at Unity Yoga and yoga capris! Yay!

Then, if we hadn’t eaten enough, the doorbell rings. It’s two laurels from my class, they made me a fruit pizza. We had talked about that a few weeks ago at mutual and were sweet enough to remember I love it. 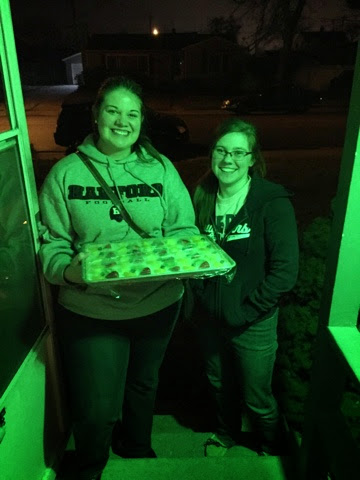 We rolled ourselves into the other room and watched The Maze Runner. It was WAY more suspenseful and scary than I thought it would be! I kind of want to read the books now, so I know what happens next.
Today we had a youth temple trip. We had a big group, how fun. I’m an awesome towel-passer-outer. I made everyone cupcakes for my birthday so we had those outside the temple. Yum!

On our way home we swung by the loft, and the upstairs bathroom is done!

It looks fabulous. It’s FLOORS NEXT!

By Alyson | Uncategorized | No Comments
2015 thank you for coming! I know it will be the best year ever! Here we go!