By Alyson Uncategorized No Comments
We came home from 80 degrees…to this..

But I love the snow and cold around Christmas. And Christmas in Richland was so much fun! Erin and Lil got here the same day we got home from California. It was so much fun to have them here for so long! We also got to celebrate 3 birthdays and an anniversary over the break. I guess when your family is so big it’s bound to happen.

First, we did our annual gingerbread house building with the Wallace family. We used a kit, but added on a deck of graham crackers. I think it turned out pretty cute.
Then it was Arlo’s birthday, he turned the big three! We went over to his house for for pumpkin pie (w/o the crust) and played games. Nathan and Arlo built a train track, and Nyssa and I made a new fairy for her fairy house. Oh, and I got a makeover from Nyssa.
Christmas Eve was spent with most of the family here, even the Wallace family came over. Forrest got into town and Carson, Trish and Jamison got in too. It was a lot of fun. We had appetizers, played games, watched a few short videos to remind us of the real meaning of Christmas, and enjoyed being together. 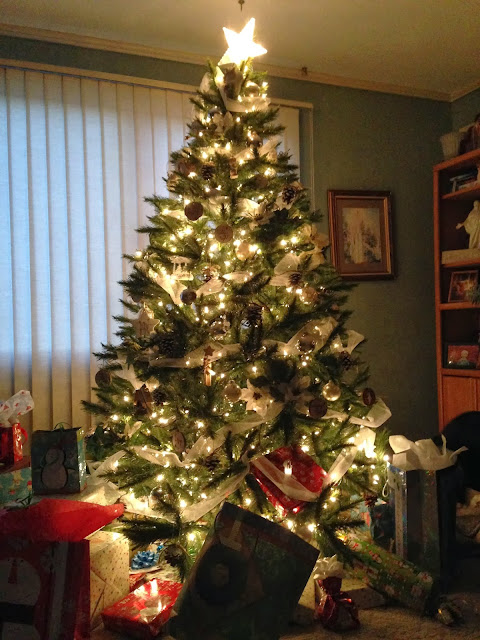 Christmas Day was so much fun! I woke up at 6:45 wide awake. We had two kids in the house and I didn’t hear a peep! I stayed in bed and tried to be patient. I couldn’t. So Nathan texted his mom, and they were up! So we drove over there and watched them finish opening their presents. And then they opened the presents from us. We opened a few of our presents, and the ones from them. I surprised Nathan. He loves ultimate frisbee. They have started a professional ultimate league. One of the teams is in Seattle, The Rainmakers. This is his favorite team. So I got him a t shirt and shorts with their logo on it. He was totally not expecting it and it was so fun to give! After the presents were opened, we sat around and talked. Then I got a text from Carson saying everyone was up.

We drove back down to the Sant house and watched the kids open their presents. The kids were so cute. The parents…not as cute, but still fun. 😉 Nathan got me the sweetest gift. First, short background story. I LOVE french bulldogs. End of story. Nathan got me a glass jar. On the outside of the jar, he had made a label. It was a french bulldog fund. Inside the jar was already $182.04. He had saved money, cashed in ALL our change and put it in the jar. How awesome?! That is one of my 2014 goals. I mean look how ridiculously cute they are!

Friday was our anniversary, but Nathan was a sicky pants. So we got a blizzard and watched a show on Discovery channel about parasites. Romantic…I know. Saturday we celebrated Jamison’s 4th birthday and Zachary’s 22nd. Wow. My baby brother is 22? …how?

We had pizza, cake and dirt dessert. Everyone was gone by Sunday when we got home from church. It was so much fun to have everyone home!