(that means bear world in spanish) Anyways, Bear World was really fun. Yellowstone has a little park just 5 miles south of Rexburg, called…you guessed it, BEAR WORLD. I’ve heard since I’ve been up at school that it’s lame, overpriced and not worth it. Every time we drive by, it looks awesome. AND today was the last day of Cub Palooza. Which means…half off entrance and you get to see baby bears. So we went and it was so much fun. (You hear that all you downers?! It was fun!!)

It was raining when we got there, but it stopped soon after. I think this slowed down the crowds. We have good luck with rain. So for $16 Nathan and I got to drive around through the park as many times as we wanted, and go to a petting zoo, and see baby bears and eat fudge. We decided to stop and see the cubs before we drove around. They were SO cute!

With the cooler weather, they were more happy to play and run around. We were surprised at how clumsy they were. But then we decided they’re pretty awesome for 3 month olds. After we oo’ed and aww’ed for awhile we went into the petting zoo.

There were some hungry goats that only hung out by the little stands where you can buy food. There was a huge pot belly pig. Some chickens, peacocks, moose, 4  ducks a waddlin’ , three deer a dancin’, 2 goats a eatin’ and a partridge in a pear tree. Wait…what?

We found out that grizzly bears are tall, and Nathan looks like he’s 6ft. He really likes his photo. 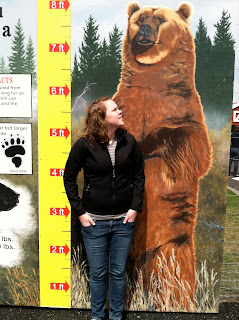 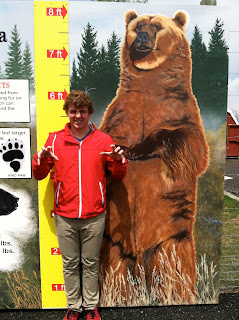 After we left the petting zoo, one of the workers was holding a baby bear so people could pet it. I grabbed Nathan and we speed walked over to the baby. His name was Spanky, and he was sucking on the workers neck. And they make this weird noise… I don’t even know how to describe it. But they make it when they’re happy, so it’s kind of like how a cat purrs. Except…it’s a bear, and it’s not purring.

THEN…we drove around the park and saw a million animals. There were goats, elk, bison, and bears. Lots of bears. This is bear world…

Nathan and I realized that whenever we were pretending to talk like bears, we made them sound really unintelligent. But then we decided that was mean, since they’re really smart. But we couldn’t stop. They’re hilarious looking.

We had fun, and I would totally recommend going if you’re ever in Rexburg. Which most likely won’t happen, so just pretend you went and watch the video.