Wow, what a weekend! We had so many people to see, so many different schedules to accommodate and only one weekend! But don’t worry, we fit it all it. I’ll break it down by day. And we ate every time we saw someone. Pretty sure we each gained…5,000 pounds. Just in time for California!

Thursday: It was a lab day in my info design class, so we headed out earlier than we thought. The roads were clear and the drive went pretty fast. Utah traffic is insane, as always. We got to Josh & pregnant Dannas in Provo around 8. We then met a baby, (not theirs)  and went out to eat at Gurus. Thanks Josh & Danna for introducing us. Super delicious! We then came back to their place and played Settlers of Catan. Okay, I thought this game was way lame, and that only nerds played it. If that’s true, then I’m proud to say I’m a lame nerd. It was so much fun. 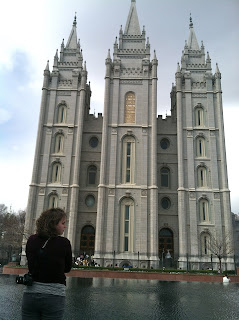 Friday: We slept in since we were all up so late! Then Nathan and I were off to SLC to meet a few of his mission friends for lunch. We met up with Kevin Bateman & his lovely girlfriend Kim at Temple Square. City Creek is the new mall they’re building across the street from Temple Square. They have a sweet foot court. We got greek food. We talked and hung out for awhile, then we headed back to Provo because we had to meet others at the Argentine Bakery. We met up with a bunch of mission friends, and ate empanada,  a milanesa sandwich and alfajores. It was really fun for Nathan to get to see most of his old companions from the mission. It was also a lot of fun for me because I got to see the people that he talks so much about.

After we sat in this little bakery for a few hours, we were off to go see Marshall & Jacob perform in Guitars Unplugged. They did great! We also got to see Devan, and Matt & Julia Merrill. After the show we went to a frozen yogurt place and ate some more! (Meanwhile, Danna & Josh have left for a campout and said we could have people over if we wanted.) Then we invited them over to play Settlers of Catan over at “our” place. Ben was able to join us too, he was also playing in a concert. It was fun to get to see some of our Richland friends. We again went to bed too late.

Saturday: We slept in again. Glorious! Nathan had organized an ultimate frisbee game with his old team, and some friends. It was super windy, but they had a good time. I was going to play frisbee…but it was super windy, and the only girl. So I went to campus and met up with Devan to pick up some wedding photos we had her print. They look awesome! I was so happy. By the time I made it back to my car, the boys were done with their game. So I headed back, and picked up Nathan. We got ready, and were off to SLC again to meet Goates and go to the Boyce Avenue concert. But before we left Provo we were able to go to Desiree!! Justin was working, so Nathan still hasn’t met him. But it was fun to see her, and her new place, and her new cat. haha. We stayed for a little bit, but we had a schedule to keep. haha. We had a giftcard for Cheesecake Factory, but the wait was too long since we had to be at a concert later. So we went across the street to California Pizza Kitchen. This is where we met up with Thomas Goates! We ate dinner, then went to his house (in the cutest neighborhood ever) to have milkshakes! (yay! more food!) Then he hopped in our car and we drove into downtown to go see Boyce Avenue. The line was HUGE! But we finally made it in! Secondhand Serenade also was performing. Personally, I didn’t enjoy him as much as I would have hoped. I can’t say the same for Boyce Avenue. They were just as amazing as I thought they’d be. They played both original, and cover songs. Super talented and we converted Goates. In fact, he learned one of their songs the next day!

Sunday: Right before we left, we were able to stop and see Tiffany & Sabrina! My old roommates and friends. They’re both in Provo and doing good. Then we were on our way to see Seegrist and his fiance. We drank mate, and met a baby duck. AND a baby goose! We also ate at In n Out. There are only three things on the menu. I got a number 2.

The drive back to the burg felt faster even though it was snowy and windy. We got in, and pick up Plankton from the Conrads, (They were great babysitters!) unloaded the car and went to bed. We had a blast!